Why did I build a Movie Theater in my basement?

I love movies, and my Mother loved movies.  She loved the stories told by her favorite movies and had several favorites she would watch every time they came on broadcast Television, over and over and over.  She and I are alike in many ways and I suppose I gained my love for movies from her while watching her favorites with her over the years.  She loved stories of great achievement (Bridge on the River Kwai), great men and character (To Kill a Mockingbird), perseverance and strength (Shenandoah), and sometimes funny stories set in a historic backdrop (Mr. Roberts).  I love science fiction, action, period pieces and stories of great mean and great achievement (Gladiator, Last of the Mohicans, Master and Commander, Serenity).  I also loved her movies as well – To Kill a Mockingbird being in my top five favorites.

I love not only the stories (like my Mama) but am also fascinated by the process of making the movies, the sets, the costumes, the lighting, the sound, the technology, the direction – and of course the presentation.  Mama was perfectly happy with movies on a 19″ television, but I longed for an experience more like a real movie theater.

When I was 8 or 9 years old I bought a small 8mm projector from the back of a magazine for twenty dollars, and experimented in our attic with setting up a way to have a larger projected screen.  I tried sheets, cardboard, poster board, painted wood, anything to approximate a screen, and one thing I learned back then – “you cannot project black”, thus you need absolute darkness for projection to be optimal.  I still have that projector and many of the 8mm abbreviated classic movies I purchased.  Later, my Aunt Ruthy gave me an old 16mm projector and a few movies for it.  I remember getting my hands burned many times by its steel frame that got almost red hot from its powerful lamp after thirty minutes or so!

As I grew to be an adult I kept my love for movies and the proper presentation of what the Director intended his audience to see.  I also developed a love for music, and of course, the optimal presentation of sound so I purchased and owned many different types of stereo equipment – continually chasing better and better sound production.

As I grew older, I spent more time listening to music than watching movies, but I never lost my love for movies.  I could attain better and better home sound, but projection and optimal sound for movies was out of reach.  In the 1970’s I glimpsed the future when Advent released the The Advent VideoBeam 1000 Projection System and then in the early 80’s Henry Kloss created the “Kloss Novabeam” – it was a two piece projector and screen that could project television, and movies and was intended for home use.  I lusted over this amazing piece of technology but its cost was so far beyond my means.  I simply admired it from afar, in magazine articles and the occasional visit in a store.  Once I saw it in person however, I knew someday I would have a projection system in my home – somehow.

Fast forward to the 1990s.  The wife and I finally had an opportunity to purchase land and build a home incorporating every feature and layout we had loved and collected from houses we had seen in person and in magazines our entire lives.  As our dream home’s plans were being drawn I targeted and planned the room that one day would house my very own – Home Theater.  It would reside in a finished walk-out basement room, that I insisted have nine foot ceilings, although basements usually only have eight foot ceilings or less.  I knew the room height would be important for a projector which by this time were more readily available in the form of analog CRT three beam systems, not unlike the old Kloss Novabeam, but this time ceiling mounted projectors shining onto  wall mounted projection screens.

In the 80’s and 90’s home theater CRT projectors were large (100+ pounds) and very expensive. I kept studying, watching and waiting to see if/when projectors would possibly become smaller and/or less expensive.

While I waited for projectors to become more affordable and smaller, my first “Home Theater” was in our den.  It consisted of a Pioneer Elite RPTV, Pioneer Elite Laserdisc player, NHT L,C,R and subwoofer and various electronics over the years. It was 5.1 with the rear speakers embedded into the rear wall of the den.  We loved it, our friends marveled!

in early Fall of 2000 I saw a magazine discussing home theaters.  I discovered that digital projectors had started to become available and they were were much, much smaller than analog tube type projectors and – while expensive – they were now affordable for me.  I started to notice in magazines and on various Internet (which was still new also) Forums that more and more people, who shared my dream of a home theater, were actually starting to build them.  I saw a home theater on the Internet, built by a man in Georgia, named Buddy Yaussey.  He posted photos of his theater’s construction which fascinated me, and details of its design and construction.  I absolutely loved his theater, and studied the photos nightly.

This is what it looked like (note his CRT projector suspended from the ceiling): 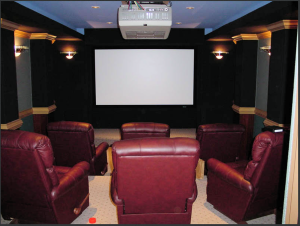 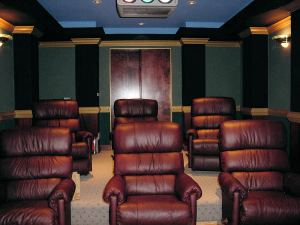 What I loved about this theater was you did not see a single wire, or speaker, it was clean, neat and functional.  I got in touch with him via email and later spoke with him on the telephone.  He explained that the design and construction drawings were done by a man who lived in Georgia named Dennis Erskine – and designing home theaters was his full time business.

The plan was coalescing in my mind now and the whole dream was starting to seem obtainable!  In case you are wondering, my wife was 100% on board, and I’ve always appreciated that. 🙂

I contacted Dennis and hired him to design my very own Home Theater – the realization of a 45 year dream.

Next, I needed to find a contractor to actually build the room itself.  I found a retired automobile engineer from the Midwest who now did odd jobs, home construction and was also a master electrician – Lew. My cousin Lee (my closest and oldest friend) is a machinist by training and education, but knows wood and woodworking as well as anyone, and he and his brothers owned a woodworking business. Dennis Erskine designed everything down to the very last detail.  Lee would cut the wood, MDF, lumber, etc. in Sumter, then bring it to my home, where primarily Lew would install it. Lew also did all the electrical wiring.  All the electronics were selected and installed by me, the research and selection being the most fun!  More on all the folks who helped make the theater a reality, under the section “The People” in the Equipment section.

And so in late 2001 construction of the theater began.  Originally the room had been a walk-out or day basement room, that housed a pool table, since the house was finished in March of 1993 – so that room had to be deconstructed, all carpet removed all sheetrock taken down, so it could be reconstructed as a theater.

This page has numerous photographs of the construction, information and detail about the equipment and materials, and so forth, so no need to rehash that here.

After approximately 6 months of construction and before that approximately a year of planning, the theater finally had its Grand Opening on May 17, 2002.  In attendance were my mother, my aunt, my niece Natalie, my cousin Lee, of course, and my wife. 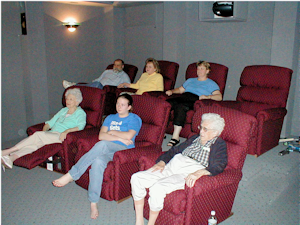 The first movie was an anamorphic DVD presentation of “Last of the Mohicans” directed by Michael Mann.  It was a nice blend between a movie my mother (and Aunt) would enjoy and a movie I loved.

Over the years I have updated and upgraded the equipment many times, I’m certain this will be an ongoing process.  One thing I DID NOT foresee was the advent and roll-out of High Definition television.  I originally intended the theater strictly for movies, because standard NTSC television projected eight feet wide looks horrible, almost unwatchable.  It is big, but nothing else good.  Around the middle of the decade HDTV started to become available, first only by satellite and later through Cable. I was the first person I knew who had HDTV, not only that but I had HDTV eight feet wide, with 7.1 surround sound!!   Suddenly the theater went from being used for only movies to now include television shows shot in HD and HD SPORTS!!  I had absolutely no idea when I dreamed of and built the theater that one day we would be watching so much High Definition sports (and TV Series) down there.

So, there you have it, a summary of the history of my home theater.

Thank you for your interest and reading this.  I assume you have been to my theater to watch some type of event, if not you are most welcome to contact me and tour my theater.  Over the years I have had several people contact me, like I contacted Buddy Yaussey, and there exist several clones of my theater around the country.  I love talking about my theater and am always willing to help anyone achieve their dream of a real Home Theater.

I think I’ll head down there and watch some 4K Netflix!