Various changes, modifications or upgrades since the theater was first constructed.  Below are the most extensive modifications.

As with all photos on this site, click on the thumbnail once to see the photo enlarged full-screen, then if your cursor is a + sign, you can click on the full screen photo to see that image zoomed to full resolution.

In May 2011, my old Sim2 DLP (HT 300 Link) suddenly stopped working.  I shipped it to Miami to diagnose the problem, but was told the cost of repair would be prohibitive.  The Sim2 folks worked with me and I ended up with a brand new new 3 Chip DLP Sim2 projector (much brighter and far superior to my old 1 chip DLP), the C3X-E.  The change necessitated a different mounting bracket and removal of the original mounting bracket and hush box because the new projector was much larger.

I also decided it was also time to investigate changing my screen fabric, now that I would have a projector bright enough to utilize the 1.3 gain Stewart screen fabric.  The long story of my original screen fabric and its upgrade in 2011 is printed below all the photographs on this page. 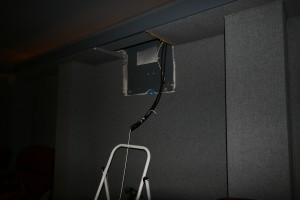 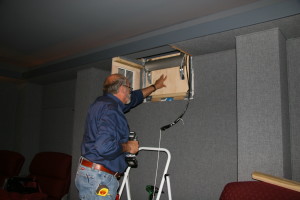 Lee preparing for mounting of the new Chief Projector arm against back wall. 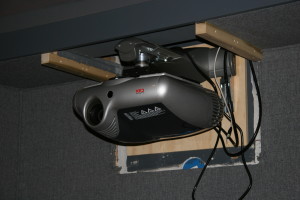 In the Fall of 2015 I once again upgraded my projector, this time to a Sim2 C3X Lumis.  Higher resolution, significantly brighter, much more contrast..  Stunning image quality – color, contrast, detail and sharpness.

After many years of focusing my efforts on video, I took the opportunity to significantly upgrade my sound quality.  Purchased a new preamp/processor (Marantz 8802A) and new subwoofers (dual Rythmik F25s). 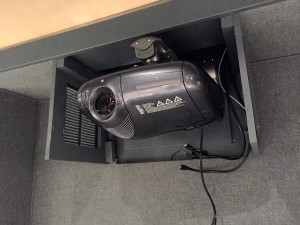 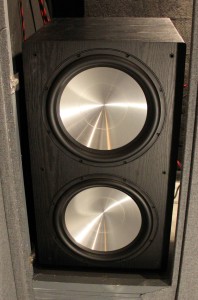 Rythmik F25 Subwoofer. The left one with my proscenium door removed.

OK, the sound upgrades, specifically the new F25 subs caused a new problem.  the low frequency sound is so powerful that it vibrates my projector – blurring the image at times!

This upgrade was done to remedy that problem, and necessitated major changes to the way the projector was mounted, from rear wall to ceiling.

The story of my projection screen is pretty interesting.  My dealer and my theater designed both recommended a Stewart screen, manufactured by the Stewart family of California.  The Stewarts have been making the best projection screens for over 50 years.  I had so many questions about their screens, the available screen materials, and so forth, that I called the Company many times and ended up talking with one of the owners and founder’s son Don Stewart. The company had recently moved into the home projector screen market and was planning to debut a new material exclusively made for home theaters, called “The Firehawk”.  Mine would be one of the first manufactured.  I also wanted my screen to be “microperfed” which meant that the screen would have thousands of tiny holes to allow sound to pass through the screen so that my center channel speaker could be placed in the center, behind the screen.

To make a long story short, when they started to manufacture my screen they discovered that the tiny metallic materials in the new screen material may damage the machine that punched the tiny holes (picture a wooden board embedded with thousands of tiny needles).  They determined that if the screen damaged the tiny pins, the screen may turn out less than perfect and re-pinning the machine cost several hundred thousand dollars.  Don delivered this news to me himself. He then took a personal interest in my theater and my screen.  When he calculated the light output of my projector (my original Sim2 HT 300) he informed me that their preferred screen material would produce an image too dim to be satisfactory.  And the microperfing also reduced the screen brightness even further.  Don told me he would think about it, but was confident he could come up with a solution for me.

Don called me back ion a could of days and had a proposal. He informed me they had a screen material that was only used for military flight simulators they manufactured for the US military.  That screen material he called “Platinum”, and it has a 2.5 gain when micropref’d. There was however one other problem with Platinum material. Screen fabric with that high of a gain would show hotspotting in the center of the image, particularly for the person seated in the middle of the theater.  Don had another solution.  A curved screen.  This necessitated an entirely different screen frame and attachment method, but Don told me it would work, and it would make my screen frame and material unique amongst home theaters.

So we got the screen frame and fabric Don personally designed and specified for my theater.  We installed everything and unfortunately had a problem.  It turned out that the tiny microperf holes in the screen interacted with the projected gaps in my projector’s DLP mirrors and created a moire effect that was annoying (to me).  I called don, and they replicated the problem in California with my projector and my setup.  Don suggested a number of different changes or adjustments, but finally the only “solution” was to slightly defocus the projected image. Don realized that was a far from ideal fix and told me they would continue to research the problem and create a proper solution for home theaters.  He then promised me that once the found a solution he would sell me a replacement screen at dealer cost to fix my problem. It was understood this fix would likely take place years in the future.

When I got my new 3 chip DLP projector (ten years later) and knew it would be bright enough for new screen fabric, I decided to take Don up on his offer of a replacement screen material.  They had found a solution to my moire problem about five years after my screen was made by tilting the microperf machine such that the holes were offset to the mirrors at about a 40 degree angle.

In 2011 I called Stewart screen and asked to speak to Don, hoping he would remember me from ten years earlier and make good on his promise. Uh oh, bad news.  Don had retired by this time and nobody at Stewart had ever heard of me of my deal with Don.  They were very nice about it all and asked if I had any proof of my conversations with Don and his offer.  Fortunately I had saved every email back and forth from ten years earlier, and the Company agreed to honor Don’s offer.

I received and installed my new microperf’d 1.3 Gain MicroTek screen in the Summer of 2011 and as you can guess my Cousin Lee helped me install it.

The screen continues to work perfectly even with my new higher resolution projector, installed in the Fall of 2015.