My theater is the result of many folks helping me with various things over the years.

The main contributor to making my theater what it is today is my first Cousin Lee Beaty, who is also my oldest and dearest friend.  Lee has put many, many hours into this theater over the last 15+ years and has helped me retrofit for various upgrades.  He cut nearly every piece of wood that went into the theater, helped me mount and install the screen and countless other things.  Lee is also the biggest fan of my theater and loves watching movies there whenever he has the opportunity.  Lee is the only other person authorized to operate the theater and often brought his nieces, nephews and friends to come see movies when Pam and I were out of town.   Thank you Lee for everything you’ve done for me over many years, I deeply appreciate everything!

On my theater history page I mentioned Lew Palshan who sadly has passed away now.  He did the vast majority of the actual physical construction, walls, sheetrock, all the electrical wiring and fixture installations.

My Aunt Alice, who has also passed away now, was an amazing Interior Designed (also Lee’s Mother).  She was a huge help picking fabric colors, carpet colors, chair materials and paint colors.

My wife Pam, who supports all this foolishness and who believed this whole project would be something amazing – and it has.  Thank you Pam!

Our yellow Lab Sandy (RIP).  She was project and construction manager.

Dennis Erskine who designed the theater and did an outstanding job.

Alan Gouger formerly the owner of AV Science in upstate NY where I purchased my screen, projector and much of my early electronics.

Don Stewart, of Stewart Filmscreen.  Not only ended up taking my calls and having many long discussions with me about projectors, screen materials and his family’s business, but he also personally laid out and designed my screen and frame, customized for my theater, and initially using material not sold to consumers – only the military.  When I had an issue with the tiny holes in the screen which allow sound to pass through causing moire problems, Don promised my next screen would be at their cost, and they made good on Don’s promise years after he retired!  Great folks at Stewart.

Robin Novoa at Sim 2 the Italian projector company.  When I had problems with my first projector Sim 2 not only made it good but they sent Robin (from Miami) to personally install my second Sim 2 projector.  Over the years the Sim 2 folks have been very, very good to me and Robin is a great guy, very knowledgeable and helpful.

Over the years we have had many friends come watch movies, I’ll post some photos of some of these folks.

Below are the most of the people mentioned above.

Lee working on the stage where the subwoofers would sit.

Lee and Lew “working”, actually they were helping me set screen height, but they both thought this was hilarious. 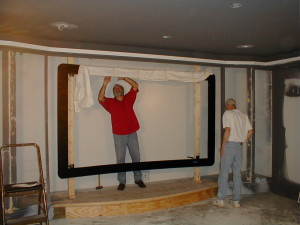 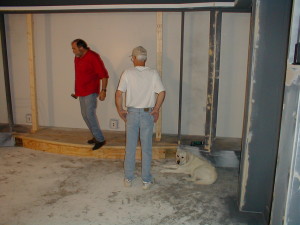 Lee, Lew and Sandy. She was the project manager, and consistently picked places to lay down where she was constantly in the way! 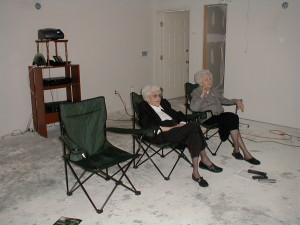 My Mother, left and my Aunt Alice. The first people to watch anything in the new theater – here obviously still under construction! Projector shining on sheetrock wall. 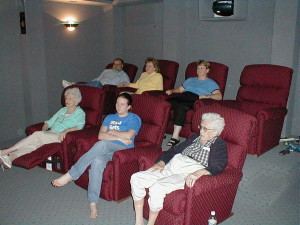 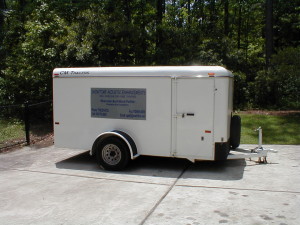 Sherman and Mardi Peiffer, the husband and wife team who installed all the theater fabric. they were camera shy for me. 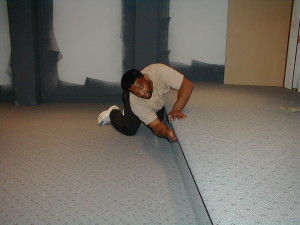 Mike Favor, he installed all my carpet.